Posted by A LISTENER at 6:34 AM No comments:

Peter Palmer and Stubby Kaye, extolling the "virtues" of our Federal government. As true today as it was half a century ago --Johnny Mercer's brilliant lyrics haven't dated in the slightest.
Posted by A LISTENER at 8:14 AM No comments:

Posted by A LISTENER at 3:17 AM No comments:

One of the greatest garage punkers of all time.
All attempts by the Army's heavy artillery to dent the lead singer's hairpiece have proven unsuccessful.
Posted by A LISTENER at 5:37 AM 1 comment:

From Rat Pfink A Boo Boo, the classic superhero spoof by the late schlockmeister Ray Dennis Steckler -- a film released, it should be remembered, several months before the TV debut of Batman. This rockabilly number was instantly archaic in the age of Beatlemania.
Posted by A LISTENER at 6:17 AM No comments:

Two legends chatting and jamming. This recording was made in a NYC hotel room around 1971 and was unearthed after Lennon's death.
Posted by A LISTENER at 3:52 AM No comments:

Posted by A LISTENER at 2:04 AM No comments:

Posted by A LISTENER at 5:51 AM No comments:

There was  a thriving rock & roll scene in Hong Kong during the 1960s. A number of bands made records, often remakes of American hits:
The Zoundcrackers - "I Gotta Find Cupid" (1965)
This was a cover of a Gary Lewis and The Playboys original which I've never heard. I'm probably safe in assuming this cover version is superior:
The Magic Carpet - "Things Go Better With You"
This is a rather speeded-up version of a minor hit by The April Fools. The original was more sunshine pop, rather than the garage bubblepunk heard here:
The Quests - "Mr Rainbow" (1968)
The Quests -- who were actually from Singapore, but playing in Hong Kong -- had been a successful pop act since 1961, so it's not surprising they took Tomorrow's "Hallucinations", removed the psychedelia, and transformed it into group harmony pop.
The Mystics - "Sweet Soul Music"
This starts off as a bar band remake of Arthur Conley's smash, but then replaces the soul stars of the original with the names of notable Hong Kong performers, even performing bits of their hits! Fans of the HK scene must've gotten a huge kick out of this one.
Thanks to zoundcracker
Posted by A LISTENER at 4:16 AM No comments:

Greg Dempsey and Kathy Yesse move from the Gas Company (see post of May 15) to psychedelic folk-rock. Perhaps the album might have sold better if it hadn't had such a horrendous cover.
Posted by A LISTENER at 6:32 PM No comments:

Another great track from the Cold Fact album (see post of May 13):
Posted by A LISTENER at 3:50 PM No comments: 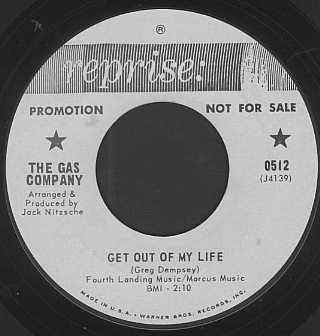 Tulsa Oklahoma's Greg Dempsey migrated to Los Angeles in the mid '60s. He and lontime partner Kathy Yesse recorded four singles in 1966-7 as The Gas Company. They were backed by L.A.'s finest session musicians. Jack Nitzsche and Tulsa's Leon Russell were also involved in some of the sessions.
I've only heard two Gas Company tracks, both of which are great. "Get Out Of My Life" is a Turtlesque punker, while "If You Know What I Mean" is wonderful sunshine pop. 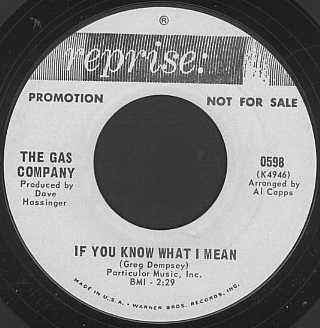 In 1968 Dempsey and Yesse would release an excellent psych-folk-rock album as The Daughters Of Albion. Maybe I'll get to that in a future post.
gascompany_getoutofmylife.mp3
12 if you know what i mean.mp3
Posted by A LISTENER at 9:06 PM No comments:

There's no business like Show Business:
Posted by A LISTENER at 6:57 PM No comments:

The son of Mexican immigrants to Michigan, Detroit-based singer-songwriter Rodriguez released two albums in the early '70s. Despite the inevitable comparsions to Dylan the albums didn't sell, and Rodriguez went into the construction business accepting the fact that he would be forgotten.
Except that he wasn't. Somehow, his albums became popular overseas  -- first in Australia, then South Africa. Totally unknown in his home country, in South Africa he drew 5,000+ crowds. All this interest led to his albums being issued on CD and a tour of the US (his first ever) this spring -- he'll be back here for a few west coast dates in June.
Article on his 2009 US tour:
http://www.freep.com/article/20090507/ENT04/905070403
Posted by A LISTENER at 11:52 PM No comments:

It may seem curious at first, but Darin gives the song a nice gospel vibe missing in Randy Newman's dryly satiric original:
Posted by A LISTENER at 11:15 AM No comments:

Two songs: "Turn On A Dream" and the classic single "Soul Deep". Enjoy the performance and try not to scream too much during Virgina Graham's interview:
Posted by A LISTENER at 9:28 PM No comments:

An "art-glam punk" band from Liverpool. Note the quote from "Starman" (which is actually a quote from "You Keep Me Hangin' On"):

Posted by A LISTENER at 7:54 PM No comments:

This is the same "Jezebel" that was a huge hit in the early 50s for Frankie Laine. Desi Arnaz sings it in an episode of I Love Lucy, and Herman's Hermits did it in the mid '60s.

But this is my favorite version, a sort of popedelic, blue-eyed soul cover from 1967. The Rumbles Ltd were from Lincoln, Nebraska and apparently still gig there to this day.

The original version of "Little Bit O' Soul" by the English band The Little Darlings (1965). Two years later it was a #2 US hit for Ohio's Music Explosion.

One of the definitive US garage-punk cuts, it was actually written by the UK team of John Carter and Ken Lewis (Ivy League, Flowerpot Men).
Posted by A LISTENER at 12:52 PM No comments:

The audio is from an actual Beach Boys recording session in 1964:
Posted by A LISTENER at 10:53 PM No comments:

Aside from this track, I know nothing about this band -- not where they came from, not the the year of the track's release, not even what label it was released on.
Yes, it's a blatant imitation of Chris Montez's "Let's Dance" -- but that doesn't stop it from grinding its way into your brain and refusing to leave.
Posted by A LISTENER at 3:39 AM 1 comment:

Blue was a band from Scotland that released two excellent albums in the first half of the 1970s on Robert Stigwood's RSO label. They are very reminiscent of Big Star, though whether they heard Mr. Chilton's band at the time I don't know. Despite the sponsorship of supermogul Stigwood, Blue's records failed to sell and they were let go by RSO, turning up again in 1977 on Elton John's Rocket label. Their Rocket single, "Gonna Capture Your Heart" hit the UK top 20 and even scraped the US hot 100. Shortly afterward the band relocated to L.A. but was unable to repeat this success.
All Big Star fans should check them out:
In the late '60s Blue singer Hughie Nicholson had been in the band The Poets,
best remembered for their classic B-side "In Your Tower":
Posted by A LISTENER at 3:37 AM No comments: