Commercial for a closed-circuit TV concert to be shown in movie theatres.
Also on the bill were The Beach Boys and Lesley Gore. Film of The Beach Boys' set was unearthed about 10 years ago. Has the Beatles footage ever turned up?
Posted by A LISTENER at 3:46 AM No comments: 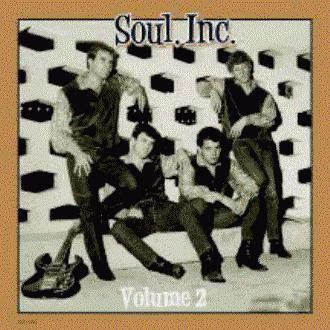 These guys were apparently one of the most popular bands in Louisville, Kentucky. 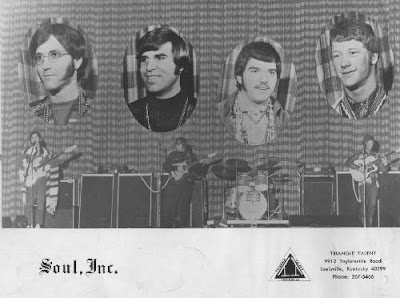 "I Belong To Nobody" was their biggest hit, making No. 1 locally and allegedly charting in several other cities after getting picked up for national distribution by the Laurie label.
(Some of you out there may know "I Belong To Nobody" via a 1980 cover by the Australian band The Flaming Hands. How a band in Australia heard an obscure 1960s record from Kentucky is a story I'd like to learn someday.)
I first heard "I Belong To Nobody" about 15 years ago on Rock & Roll Revival with Joe Donovon, a now-legendary all night radio show on Louisville's WLAS-AM. As I recall, some high school teahcer and record collector was Donovon's guest, and brought in a bunch of 45s by Louisville acts. This is the one that has stayed in my mind. It has a rueful melancholy that haunts you (and which the Flaming Hands remake never quite managed to capture). It should have been a much bigger hit.
Soul Inc - I Belong To Nobody.mp3
Posted by A LISTENER at 3:59 AM 2 comments: 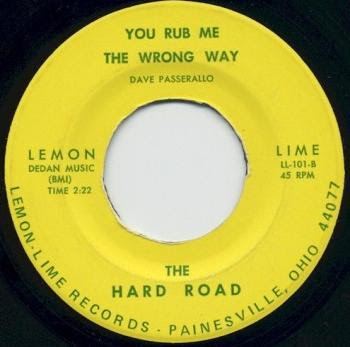 One of the great garage-rockers of the late '60s, I first heard this in the '80s on volume 2 of the classic Pebbles compilations. All I know about this band is what I read on the http://www.buckeyebeat.com website:

Not much is know about this Painesville teen band. In 1968 they were recruited by a slightly older Painesville musician, Dave Passerallo, to make a record. The Hard Road session at Audio Recording yeilded a strange pop effort with odd psych flourishes as the A-side, "So Hard To Find". The song was written by Onion Rings member Jim Finan, who presumably provided the link to Blue Onion Records. Of more interest to us is the flip side, "You Rub Me the Wrong Way", a Passerallo penned three chord rocker with some blistering fuzz guitar. The Hard Road 45 was initially released on Passerallo's Lemon Lime label but after getting airplay for "It's So Hard Ro Find", Dale Davis' Blue Onion label picked up the record for wider release. An Audio Recording acetate has surfaced pairing "You Rub Me The Wrong Way" with a nice garage ballad, "By The Fire", a song that Passerallo had wrote and recorded with his vocal group the Four Escorts. 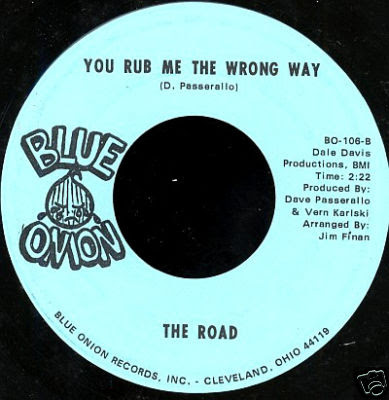 By 1968 The Road's sound of fuzz guitar and Vox organ was considered unfashionable, so it's not surprising "You Rub Me The Wrong Way" went nowhere commercially. It wouldn't truly be appreciated until the Pebbles series came out a decade later.


Free file hosting from File Den
Posted by A LISTENER at 8:14 PM No comments:

I'll Cry Out From My Grave

Shaun Harris was the bassist for the 1960s cult favorites The West Coast Pop Art Experimental Band -- an outfit that, I must confess, I've never heard (although their tumultuous history reads like it would make an interesting screenplay). The WCPAEB broke up in 1970, and the next year Harris released a half sunshine-pop, half country-rock single called "I'll Cry Out From My Grave (God I'm Sorry)," under the name Brigadune.

Thanks to redtelephone66
Posted by A LISTENER at 7:03 AM No comments:

The Fogcutters were from Denver. They sounded kinda like The Beau Brummels would've sounded if they hasn't rehearsed much. They never made the national charts, but this record DID get heard by a national audience -- it was used in an episode of THE FUGITIVE TV series. IIRC, it was heard over a transistor radio as some teenage punks harass Dr. Richard Kimble, an innocent victim of blind justice. I can't say for sure why this record was used, presumably because it was released on the Liberty label, which was owned by United Artists -- producers of THE FUGITIVE.
This is a very simple, almost primitve record that has nevertheless stayed with me since I first heard it 15 years ago. It's crying out for a remake -- perhaps Yo La Tengo is looking for material?
The Fogcutters -- "Cry, Cry, Cry!" (right click, then save link as): http://www.uploadho.com/files/1239568779.mp3
Posted by A LISTENER at 8:37 AM 1 comment:

This will be a blog about music. And since I like everything from rockabilly and alt.country to freakbeat and garage rock, things may get a bit eclectic...
Posted by A LISTENER at 8:25 AM 1 comment: